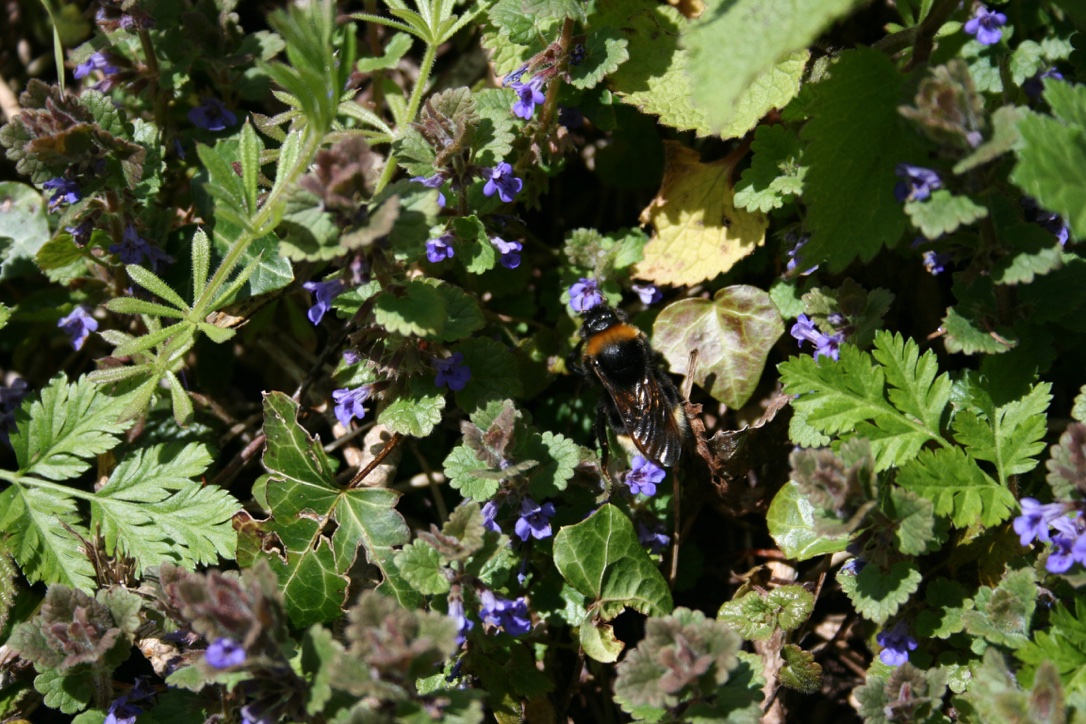 The meadow has its first flowers of 2016 and is beginning to come into being. Bugle, Ground Ivy and Dead Nettle are romping through: clinging on under the trees and overhanging the railway walls. Ground Ivy is particularly mesmerising at dusk/ low light levels – it seems to have an ultraviolet glow about it . Perhaps this is a deliberate attraction for the bees (who see UV): certainly the bumblebees flock to it. This morning there were all sorts of varieties. I counted at least 5 – but I am still not sure which ones they were.

Ground Ivy (Glechoma Hederacea) along with Bugle (Ajuga Reptans) are such beautiful ground cover plants. They are both part of the mint and deadnettle family – having aromatic foliage and stems and the distinctive labia petals. When you look closely at it you can see the similarity to Mint, Staychs and Nepeta.

All are easy to divide and multiply… And because they grow by sending out runners as soon as you have a few (as long as you have planted them in the right place) you will very quickly gain a carpet.

Both were here when we arrived at the Farm – clinging on to the remnants of the railway wall and growing underneath the Lombardy poplar…. But since I’ve sown and ‘managed’ the meadow the ivy has spread through the grass and provides brilliant ground cover on the ‘edges’ of the garden: blending one area with another.

These are native plants found in grassland, scrub and woodland clearings and (as with most plants) look their best when they are grown where they are meant to grow- under deciduous trees and over steep slopes, rockeries and retaining walls. Let it get into your lawn or ‘wilder area’ and then mow it away in the areas that you don’t want it…. After all what is better than the buzz of bees in springtime?