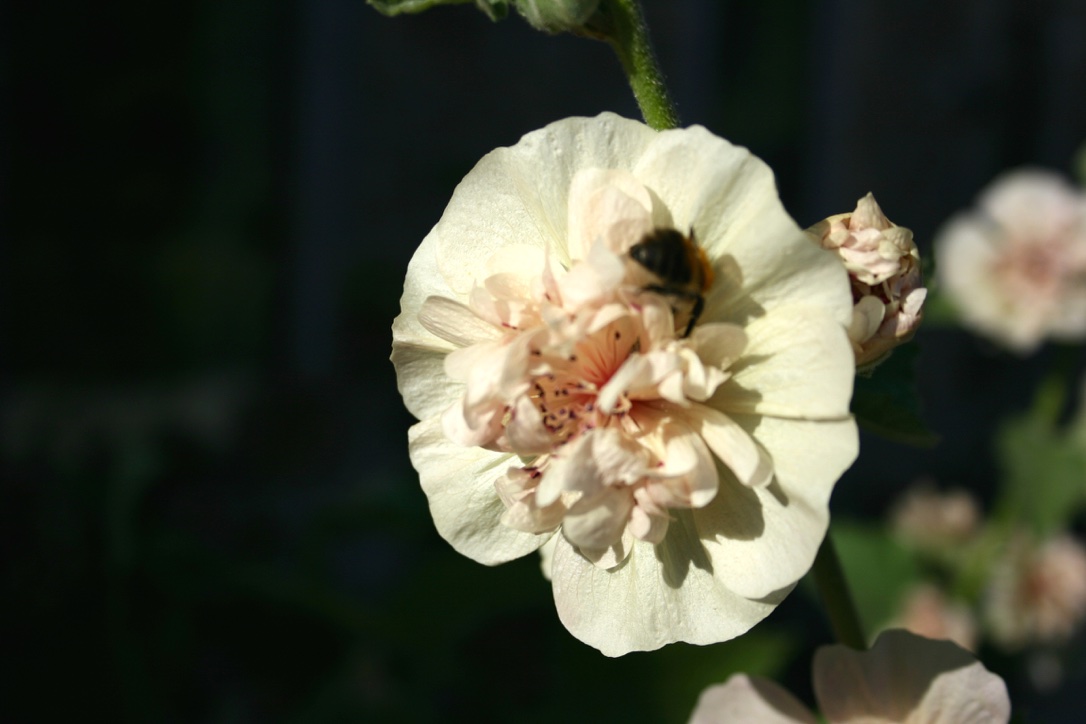 Apologies for Blog -hiatus. Whilst the children have been at home I have found it particularly difficult to put finger to keyboard and to think for a period of uninterrupted time. Life has become a series of bite-sized goings-on that are rooted in the moment. And now that the holidays are nearly over I can take 10 minutes to stand back and look at the garden and appreciate it. It has grown hugely and gone through many stages: early summer “zing”; high summer abundance; and late summer “golden hue” – where the tawny bronze seedheads and the golden grasses predominate – my favourite.

I’ve just got back from Ile de Re… A small island off the south west French coast, very near to La Rochelle.

The island has a lot of protected habitat. Marshlands that were deliberately   created to farm oysters and sea salt are now havens for wild birds and wild flowers. Large sand dunes lead into pine forests.

Everywhere you go there are meadows. The sandy limestone soil suits similar plants to the ones that thrive in my garden…. Except that the heat and the sand mean that the flowers (not the grass) dominate.

Self-seeding biennials and perennials find their way into cracks in the pavement or space in the gravel or masonry joint.  The flower that has become synonymous with the island is the hollyhock… They are everywhere, in every colour.

My favourites are the lemon coloured ones. The first time I saw lemon yellow hollyhocks were at my Dad’s farm in his gravelled yard. Dad had gone on holiday to Greece and had loved the hollyhocks, so he had brought back some seed and “thrown” it into the gravel around his yard. He had also sprinkled fennel seed liberally. The result was completely captivating: beautiful, cultivated and yet haphazard and chaotic and a “natural”- looking planting. So I am going to attempt to do the same.

I planted a cultivated hollyhock last year. The specialist plant nursery I bought them from called it Alcea “Parkallee”. I was dubious about it because it is a double flowered cultivar… But the canny nurserywoman showed me it covered in bees growing out of a crack in a polytunnel and I fell for it. So, I planted it by the big barn door and it grew and grew and grew…. Not like a hollyhock… more like a giant candelabra.

I did some snooping online and found it IDed as x Alcalthaea suffrutescens ‘Parkallee’. Apparently, it is a hollyhock crossed with a wild marshmallow. It certainly grows like a sub-shrub, rather than a straight-up hollyhock, and it has no hollyhock rust, but, it has needed staking and it doesn’t stop growing.

The bumble bees are all over it….They get so drunk that you find them sleeping in the underskirts…( It looks a bit indecent).

I like its delicate tutu-like buff flowers with maroon fringing…. But it doesn’t mix with my fennel or satisfy the hollyhock-hankering.

I have deliberately used a lot of self-seeding plants in my gravel gardens. Allowing and encouraging plants to self-seed must be part and parcel of gardening with nature. Garden guru, Noel Kingsbury says:

“Once we planted things and expected them to stay where they were put. Gardening now is much more accepting of spontaneity, of natural processes of birth, death and decay. Embracing plants that self-seed is part of becoming a manager of nature rather than a controller. Seeding is a vital way in which plant communities thrive and survive. Allowing it in the garden can be seen as a way of the garden becoming an ecological system.”

This approach means that the naturalistic planting schemes that I admire can be attained much more readily. But, its major downside is its unpredictability. Some species may not do as well as imagined, and, those that do too well can quickly become weeds.

So, my gravel beds have been planted to a “plan”, but it was the evergreen “permanent” planting that I concentrated on, by contrast the self-seeder plants were placed where I thought they might like, but I expect them to move and find their own spaces.

The advantages of using self-seeders is that from a packet of relatively cheap seed you can have instant colour and introduce plants to the garden that are valuable food sources for wildlife (honestly – the bees are amazing). The disadvantages are that you need to weed carefully, – identifying new seedlings and letting them grow on and weeding out weeds as well as over dominant plants. You will not be able to completely control your planting; you are merely an editor. And, in order to make sure your seed can germinate you need to keep some soil/ gravel surface bare (which means more weeds and more weeding).

As the saying goes: The only constant is change. Sow some seed and add a bit of chaos to your gardening… its addictive.